On October 17, the UN’s International Day for the Eradication of Poverty, and in the spirit of Sustainable Development Goal 17: Partnerships for the Goals, Comic Relief US and Laureus Sport for Good co-hosted a unique event called 17on17Summit: Global Partnerships to End Child Poverty.

The goal of the event was to accelerate progress towards ending child poverty and to foster a network of cross-sector connections, innovations, and ideas. The gathering, held at the United Nations’ Delegates Dining Room, brought together 150 people with different perspectives, experiences, and knowledge for a series of panels, keynotes, and discussions.

These diverse and dynamic voices came from non-profits, businesses, policymakers, educators, inventors, youth advocates, media, academia and more. “Today is a powerful combination of smart, experienced and inspired people … all connected by a common desire to change the futures of millions and millions of children,” said Comic Relief US CEO Alison Moore. She spoke of the “very real and exciting opportunity to ignite conversations and connection” to spark fresh perspectives and unlock new lines of communication and ideation. Benita Fitzgerald Mosley, CEO of Laureus USA, concurred, saying “today is about everyone … working towards a shared goal to end child poverty, and what we can do together.”

In his keynote address, writer director, Comic Relief co-founder and SDG advocate Richard Curtis, called upon the room to ensure those ideas moved to action: “I have three words – Partnerships, Urgency, Optimism – that I want you to take away from today and implement tomorrow."

The event was delivered with the support of the United Nations Department of Economic and Social Affairs (UNDESA) and the UN Office for Partnerships. Key UN representatives also lent their voices to the conversation. Daniela Bas, Director, Division for Inclusive Social Development, UNDESA, offered powerful remarks to the group, calling on all participants to leverage partnerships as a key tool to deliver on the 2030 goals. Dame Karen Pierce, who serves as the Permanent Representative of the UK to the UN in New York, urged the importance of finding ways to put an end to the issue of child poverty, and giving concrete examples of the UK’s commitment.

The event led to provocative and powerful conversations around such critical topics as: the challenges that are holding back progress; how to build modern partnerships; the importance of including the experiences and voices of our youth; and the roles of business and government in finding sustainable solutions to the child poverty crisis. Heaven Dennis an alum from The Brotherhood-Sister Sol organization, captured the spirit of the day’s conversations, saying “If one person is struggling, we all struggle. It’s humanity,” said the 20-year-old.

Panelists stressed the critical need to “elevate the voice of all youth,” as Carla Knapp, Vice President of Native Services, Boys & Girls Clubs of America, put it. One panel unpacked the challenges faced by “unseen” and “invisible” children whether they are disadvantaged by systemic inequalities or simply circumstances.

Caroline Ford, CEO of Consortium for Street Children, highlighted the challenges with children who today are, literally, not being counted. “When you can count a population, then you can measure progress against it. When it comes to street children, we don’t know the numbers. We can’t measure it because the way SDGs are being measured is through household surveys, and when you don’t live in a household, you’re not counted at all.”

Knapp, a tribal member herself, shared the story of many indigenous youth. “When we think about native youth, we think seven generations behind, and what they endured for us to be here today. We are less than 2% of the population. We are extremely resilient. Those children are unseen by many, but not to us.”

She shared data about the impact of recognizing and listening to youth, as well as providing safe environments. “On native lands, 98% of our youth that go to a Boys & Girls Club felt they were on track to graduate high school,” an astonishingly higher number than the national average. Jocelyn Woods, a former Boys & Girls Clubs youth of the year, said “Having youth in the conversation is important, but equally important is having youth lead the conversation.”

In a candid discussion among youth panelists, they stressed the need for dignity and opportunities. Shamyah W., a participant in a youth sport program who’s now a representative of the mentorship organization, said, “There’s an emotional impact of coming from financial hardships. There’s a difference between, ‘I have pity for you’ and ‘I believe in you.’ There’s a difference between someone giving you food with pity, versus someone saying, ‘I’m fueling your body, so you can be the next leader.’ That shows I’m equal to their child.”

In addition, the audience was wowed by two powerful youth performances. First, Khadija Mohamed, a former refugee and Narratio fellow, performed a piece about changing the structures that marginalize women in Somalia. Next, New York-based Njambi Morgan, shared a provocative poem about her experience of urban poverty and hunger in the city. 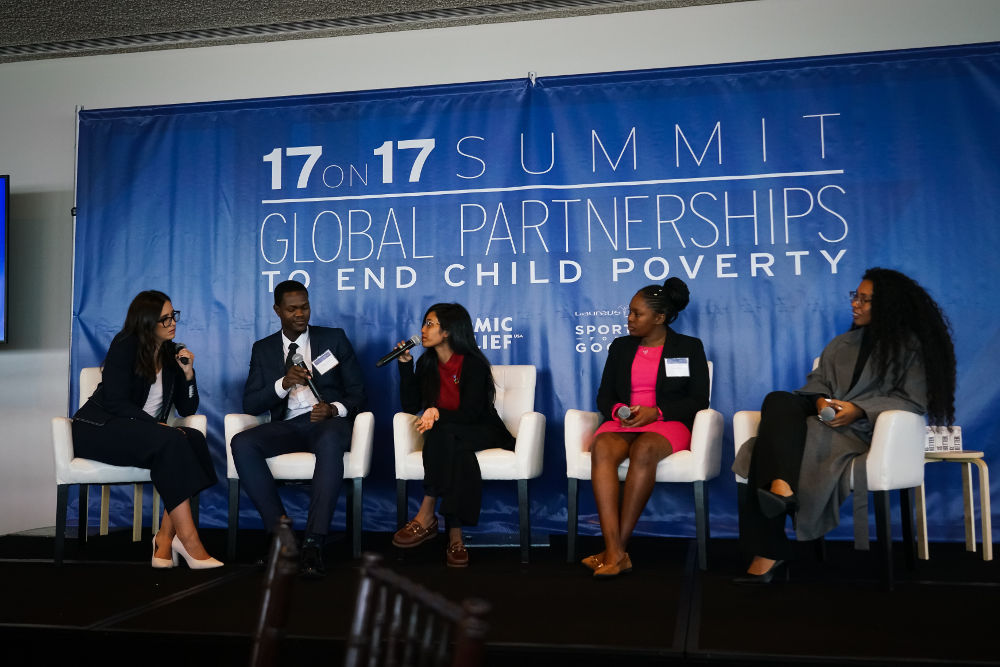 Nearly every conversation on the stage, during group work sessions and even coffee breaks touched on the urgent need for fresh, dynamic, reimagined partnerships. "The greatest innovation will be in partnerships, bringing new voices to the table, new types of companies and creative partnerships,” said Yasmina Zaidman, Chief Partnerships Officer at Acumen. She offered the example of her company partnering with a start-up solar company that only had “a prototype and a dream. No one wanted to work with them. We invested 200,000.” Now they are bringing solar power to many people off the grid. Added Caryl M. Stern, President and CEO of UNICEF USA: “It’s going to take private, it’s going to take public, it’s going to take NGOs…but we need to say what we can bring to the table and what we can’t bring to the table. If we can do that, it will cut in half the time of where a partnership could be.” Darren Bloch, Senior Advisor to the Mayor of New York City and Director, Mayor’s Office of Strategic Partnerships, described partnerships “as an approach to problem solving. Partnership is not just a thing that happens.” And when done right, “the point of partnership is that it’s a massive multiplier,” said David Barth, Vice President of International Programs, Save the Children U.S.

INNOVATIVE SOLUTIONS ARE THE ANSWER

All panelists agreed that solving poverty is an achievable goal. But that it won’t happen without new ideas, reimagined systems, unconventional partnerships and bold solutions. “Child poverty persists because we allow it to persist. It’s institutionalized marginalization,” said Save the Children’s Barth. “It’s not because we’re not affluent enough. It’s not because we don’t know what to do. It’s not because these children are hidden away and we can’t find them. It’s because we allow the manifestation of it.” It’s new thinking, unique models and creative initiatives that will move the needle on child poverty. Ravi Gurumurthy, Chief Innovation Officer from the International Rescue Committee stressed that innovation is the key to transformational change on solutions to critical issues. He urged the room to do “bigger, bolder things, with more flexibility,” including when it comes to funding new ideas, and building a culture of innovation in non-profits. “Invest in R&D, even if there are no concrete deliverables.”

One unconventional model highlighted was Copia, a for-profit organization, powered by technology, that allows businesses to safely donate their quality excess food to organizations when they need it, access enhanced tax deductions and receive powerful data to inform food processing decisions. Founder and CEO of Copia, Komal Ahmad, said being a for-profit business allows her to scale and be flexible. She refers to the hunger crisis as “solving the world’s dumbest problem,” not because it’s not important, but because of the massive amounts of food waste from restaurants, hotels, hospitals and other institutions.

“Hunger is not a scarcity problem, it’s a logistics problem,” says Ahmad.

THE ROLE OF BUSINESS AND GOVERNMENT

Several on stage touched on the need for the role of government to evolve its approach. “We can use the tools of business to solve the world’s poverty problems,” said Acumen’s Zaidman. “But capital is a tool, if we don’t see it going into new hands, with new ideas, I think we’re just moving around the deck chairs.” UNICEF’s Stern applauded the growing list of companies that are rethinking how they can use their existing products or services for good. But she’s even more excited about companies that are emerging in the private sector that are born with a service mission to society.

One example was Conceptos Plasticos, a Colombian social enterprise that has formalized the recycling system in underserved communities, paying women to collect plastic waste to provide for their children. The waste is then made into bricks that are more sustainable and used to build schools. “They are building an industry, paying wages to women children and creating something entirely new” that serves humanity, she said. Fatema Z. Sumar, Vice President of Global Programs, Oxfam America, said to think of the role of government as three things: shifting power to the very people living in poverty; financing the gap in funding and resources in a way that works, using data and research; and putting equality between rich and poor into the equation. Government can do a lot, but it can’t do it alone, so what we look at is “how is government setting the vision, and helping bring in others,” said Bloch. 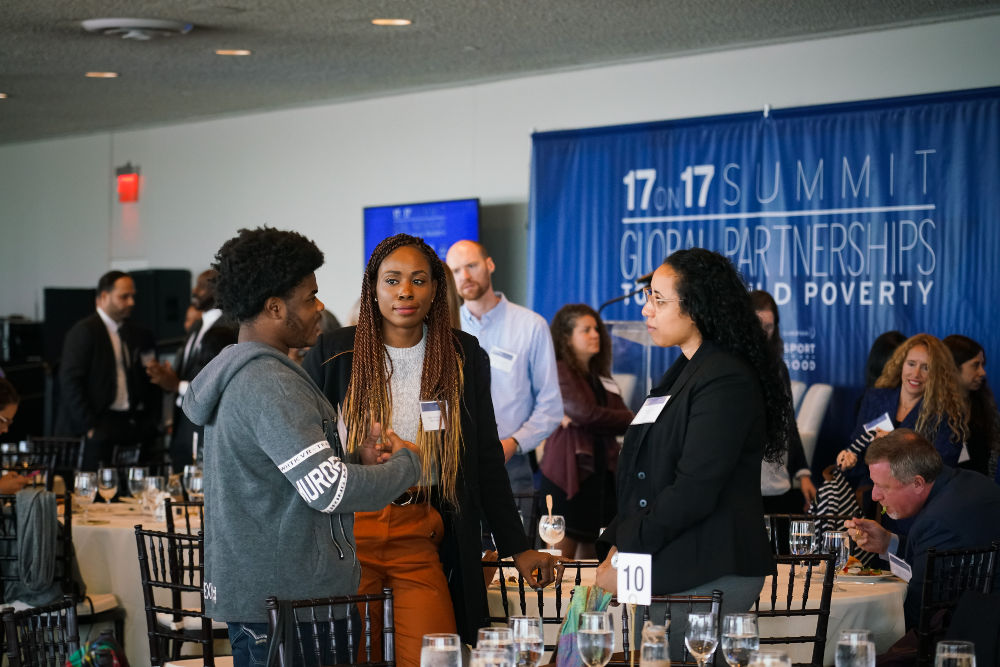 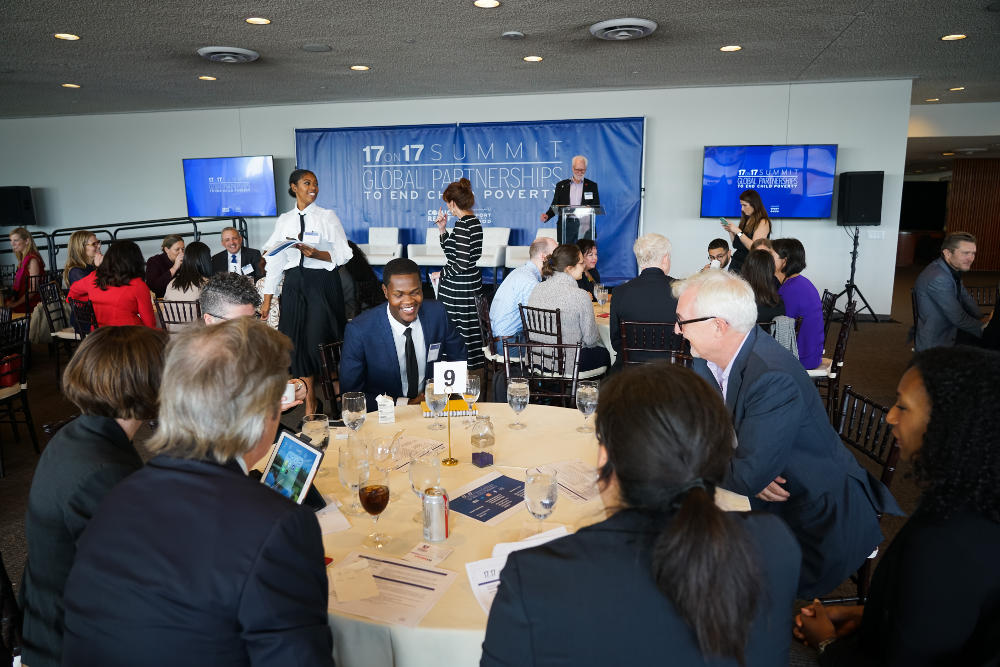 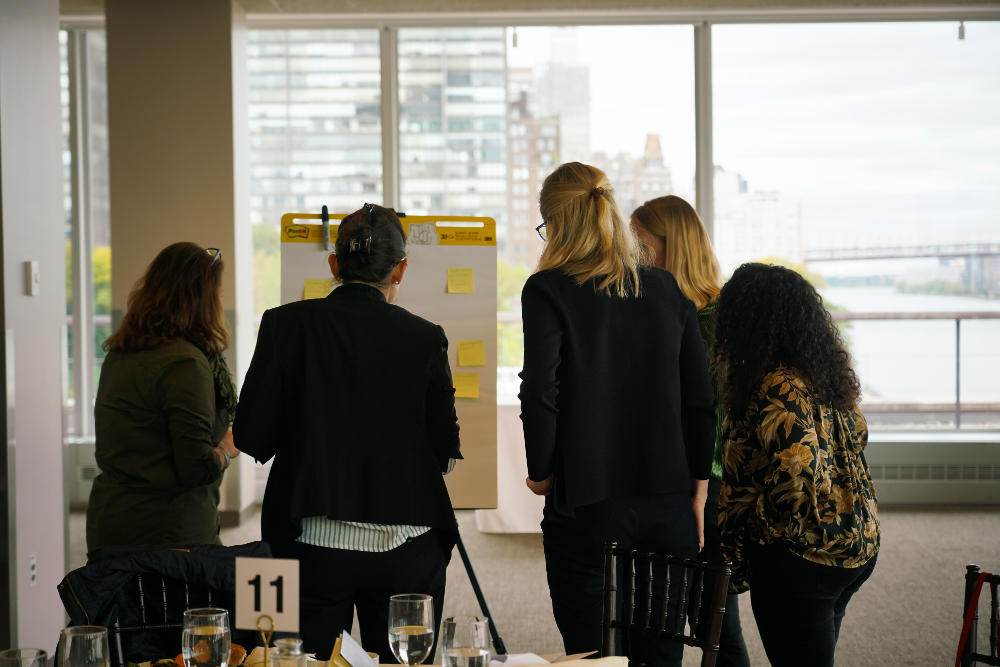 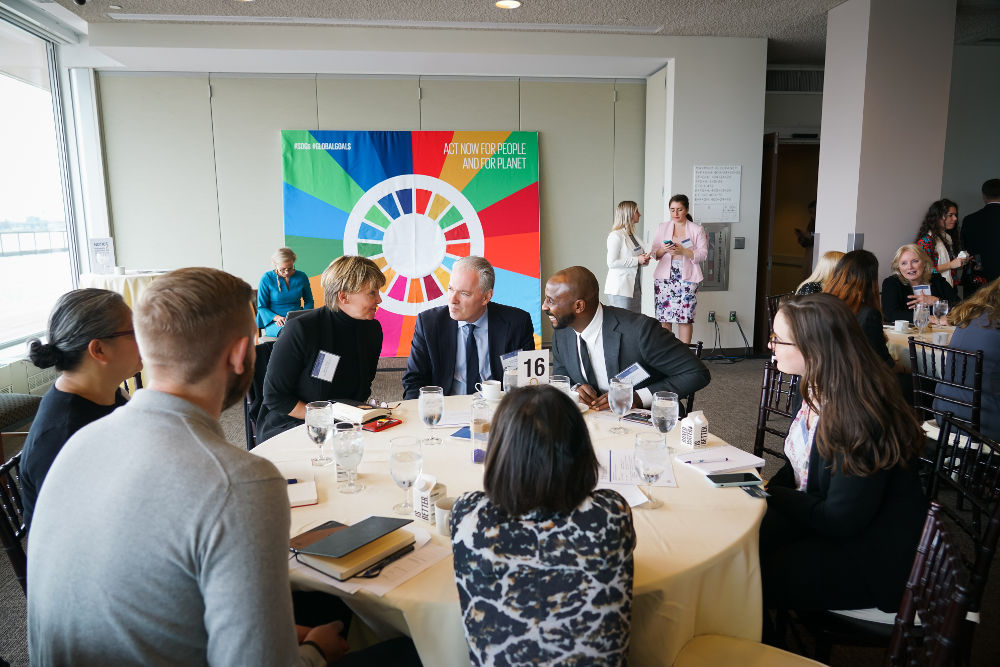 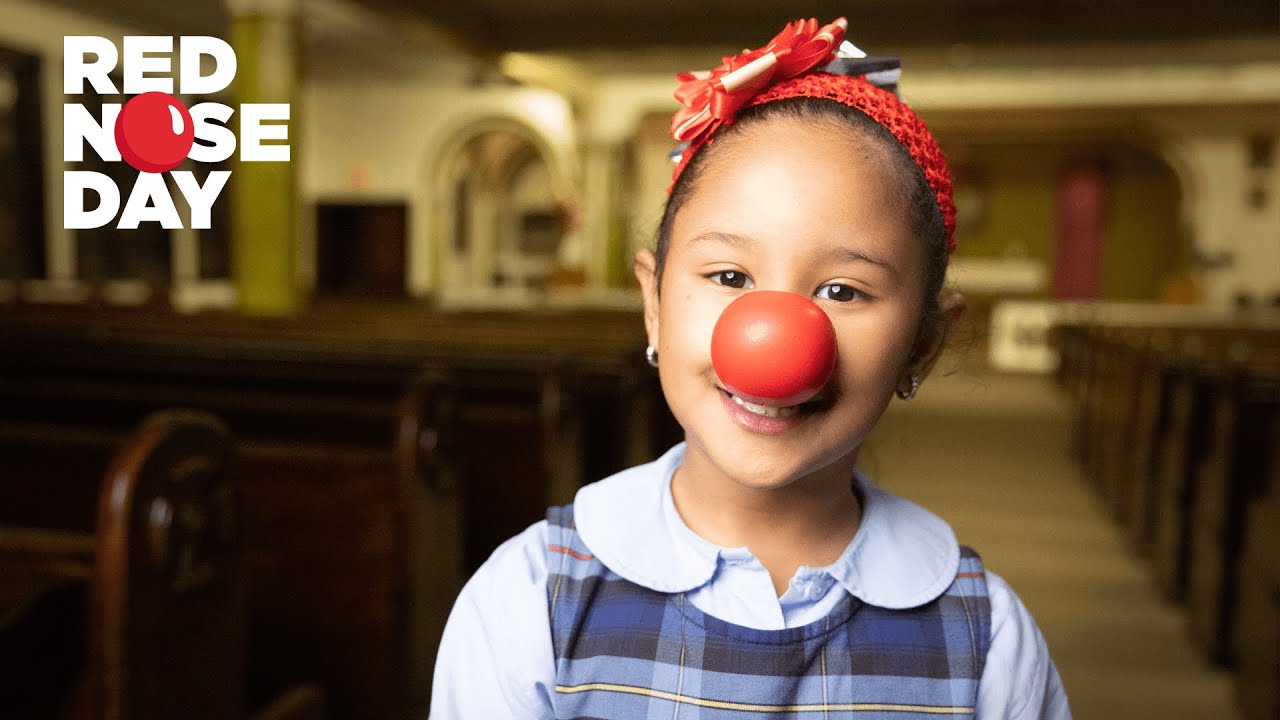